On October 15, 2015, Mr. Michael Karpovage, author of Crown of Serpents, visited middle and high school classes at South Seneca. English Language Arts 7, 8, and 9A students, led by Patricia Parsons, Kimberly deCoudres, and Victoria Calarco, are embarking on a year-long study of what makes our community unique. One thing that makes our community unique is the Seneca White Deer herd that resides at the former Seneca Army Depot. The organizing teachers ran across Mr. Karpovage’s novel, which is set in the former Seneca Army Depot. The novel, Crown of Serpents, is an edutainment novel (the author described this as a novel that entertains and educates). In the novel, the main character, Jake Tununda, happens upon some discoveries that lead him to the mystery of the missing Crown. Many of the scenes in this story take place in our own area: the former Depot, Romulus Historical Society, State Trooper Barracks, and even the Three Bears. The White Deer are also involved in this novel, in the form of a White Deer Society, a group of Seneca’s that guard the secrets of the Crown. 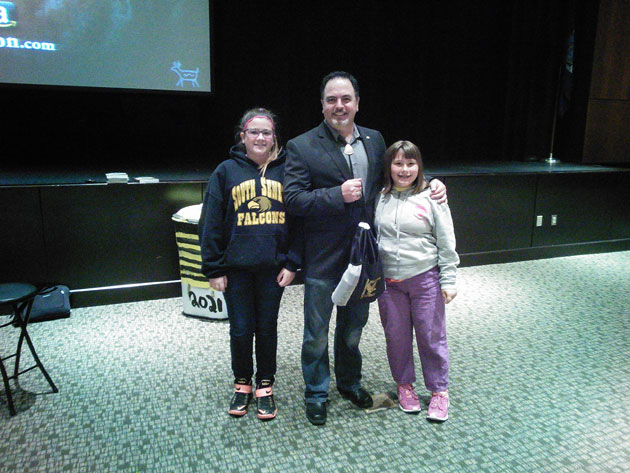 Mr. Karpovage gave several presentations on October 15, to many grade levels. He discussed his main profession, as a graphic artist and cartographer. He shared several examples of his work, including some local logos that he has completed for St. John Fisher College and TC3 and some wonderful maps that he has completed for Seneca County and Savannah, GA. He spoke with the students about going after their passions and not giving up until they have met their goals. Mr. Karpovage went on to talk about how he became and author and what kind of work was required to author a novel. Mr. Karpovage chose to write a novel based at the Depot because it was a well-known place in our area, yet a place of great mystery. He conducted many interviews to make his book as realistic as possible. He also included many well-known sights in the area to build an interest in the novel. Students were shown some pictures that Mr. Karpovage took when he was granted a 1 hour tour of the Depot many years ago. It was very interesting to see the Depot through an author’s perspective, and how Mr. Karpovage was able to build on things that he saw during his visit. At the end of the presentation students were able to ask the author questions. Questions ranged from “Would you want your book turned into a movie?” (The answer was yes! He has actually gotten offers from producers, but at this time nothing is in the works.) to “What are some things on your bucket list? (To which he responded, definitely not sky-diving!) We thank Mr. Karpovage for spending time with us at South Seneca Middle and High School. The students enjoyed the visit and took away some great information! If you would like to know more about Mr. Karpovage, his work as a graphic designer, cartographer, or author, please visit his website at www.karpovagecreative.com. Mr. Karpovage currently lives in Georgia with his family.Photo credit: Patricia Parsons