On Tuesday at 6 pm members of the Geneva Police Department Drug Enforcement Unit and marked units ended a 4 month investigation into the sale of crack cocaine by the arrest of Terry Martin, age 41 of 525 Grace Avenue in Newark, after a traffic stop on West North Street in the City of Geneva. Martin was charged with Criminal Possession of a Controlled Substance in the Third Degree, Class B Felony. At the time of the suspects arrest he possessed crack cocaine & US currency. One vehicle used in the possession and sale of the cocaine was seized as a part of the investigation. Martin was arraigned and held on no bail due to 4 previous Felony Convictions. Martin is also currently out on bail out of Wayne County for Criminal Sale of a Controlled Substance in the third Degree. 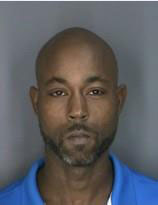 Martin is scheduled to reappear in Geneva City Court on October 15th at 8:30 am. Additional Felony charges are pending.