On November 12, 1945, Motion Picture Daily reported that Frank Capra arrived in New York City from Hollywood. A reception was held for him at the 21 Club with representatives of fan magazines and New York newspapers so that he could talk about the production of his latest film It’s a Wonderful Life. On November 16, Capra met with Jean Arthur, who had appeared in many of his films. The Seneca Falls It’s a Wonderful Life Museum believes that shortly thereafter Capra traveled through Seneca Falls on a trip to see his aunt who reportedly lived in Auburn, New York. Local barber Tommy Bellissima remembered cutting Capra’s hair sometime in the latter part of 1945.Research shows that between October and December of 1945, while Capra and his scriptwriters were developing the screenplay, the names Rochester, Buffalo and Elmira were added. Cornell University was also included, but was taken out at the last minute. The name Partridge, which prominently appears on buildings in Seneca Falls, also appeared in the screenplay at this time. Mr. Partridge was the school principal in It’s a Wonderful Life. This information is included in a new calendar just released by The Seneca Falls It’s a Wonderful Life Museum: Journey to the 70th Anniversary of It’s a Wonderful Life. This 16-month Commemorative Calendar follows the production of It’s a Wonderful Life seventy years ago – from the day that Frank Capra acquired the rights to the original story, The Greatest Gift, through the film’s premieres in New York City and Hollywood sixteen months later. Modeled after a calendar produced by Jimmy Hawkins (Tommy Bailey) in 1994, the calendar is the result of a year’s research in archives, museums and private collections across the country. Photographs from the personal collections of Karolyn Grimes (Zuzu), Carol Coombs (Janie) and Jimmy Hawkins (Tommy), together with rare photographs of scenes that never made it into the film from the private collection of Richard Goodson, provide a behind-the-scenes look at the making of this iconic film. Excerpts from original Call Sheets reflect the dates that many memorable scenes were filmed. Quotations from interviews conducted in the 1990s by Jimmy Hawkins with members of the cast and crew provide personal insights into the creation of It’s a Wonderful Life, voted the “Most Inspiring Film of All Time” by the American Film Institute. “Doodles” by Jack Okey, the Art Director, found on his original Call Sheets (one of which is reproduced as the calendar’s center spread) can be found throughout the calendar. 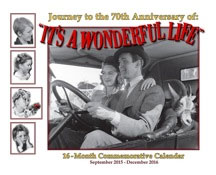