George Winston, one of the most recognized solo pianists in the world, will perform at Auburn Public Theater on Thursday, October 15th at 7:30 pm and Friday, October 16th at 8:00 pm.Since 1986, George has been raising money for food banks and service organizations and will continue to do so by working with a local food bank in every tour market to hold a canned food drive at the show and also by donating 100% of proceeds from the sale of his merchandise to the organization. The food bank for this show will be announced. 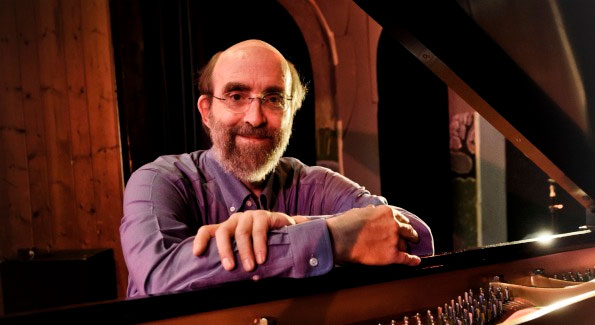 Since 1972, George Winston has released thirteen solo piano albums. His most recent albums are Gulf Coast Blues & Impressions 2-A Louisiana Wetlands Benefit (2012) and Love Will Come-The Music of Vince Guaraldi Vol 2 (2010). His next solo piano album, Spring Carousel – A Cancer Research Benefit, will be released in 2015. These solo piano melodic songs were composed in 2013 while George was recovering from his bone marrow transplant at the City of Hope Village; he is dedicating 100% of his artist royalties to benefit cancer research. A 3 song preview EP is currently available exclusively on iTunes for a limited time to benefit City of Hope. In December of 2013, George released the digital single “Silent Night-A Benefit for Feeding America,” which is available on iTunes, Amazon and Google Play. 100% of the proceeds are donated to Feeding America, the nationwide network of food banks that feeds 37 million people.George’s shows in Auburn will feature his “Winter Show,” which will include melodic fall and winter type songs, some of Vince Guaraldi’s Peanuts® pieces, pieces inspired by the New Orleans piano & the stride piano traditions, and new songs from his upcoming new recording. Tickets are $32.00 in advance and $35.00 at the door. Auburn Public Theater is at 8 Exchange Street, Auburn, NY. For more information: www.auburnpublictheater.org or call 315-253-6669. Here’s a sampling of the press:”The popular, unassuming pianist’s songs are pastoral wonders that purposefully evoke nature and landscapes in a way that’s as understated as it is beautiful.” Bend Bulletin”We started this week with a standing-room-only performance by George Winston. He performed his winter concert with exceptional prowess, not only on piano, but also on guitar and harmonica. What a treat.” Vail Daily”Pianist George Winston’s music cuts a broad swath in both style and substance…he prefers to spend most of his time on the road, finding greater contentment in a concert setting than a recording studio. His concerts are always a blend of performance and philanthropy, with a canned food drive held at every show to benefit a local food bank, and portions of his merchandise sales donated to those organizations as well.” The Intelligencer-Journal “Innovative, celebrated and accomplished, Winston is the real deal.” Toledo City Paper For more information: www.georgewinston.com