Cayuga County District Attorney Jon E. Budelmann announces the arrest today of Thomas Larrabee of Central Square, NY, a Corrections Officer with the NYS Departments of Corrections and Community Supervision (currently assigned to Cayuga Correctional Facility in Moravia, NY) on four felony charges alleging the theft of over $20,000 in Worker’s Compensation wage benefits. These charges were the result of a joint investigation involving the New York State Insurance Fund, the Department of Corrections and Community Supervision, the New York State Worker’s Compensation Office of the Inspector General, and members of the Cayuga County District Attorney’s Office. 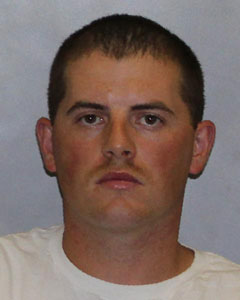 The District Attorney’s Office states that the charges allege that Larrabee, 28, forged several different claim forms (as being from his medical provider) and submitted these fraudulent documents to NYS DOCCS in order to receive worker’s compensation benefits, as well as leave and wage replacement benefits, to which he was not entitled. These allegations involve submissions spanning the period from 8/12/14 to 10/3/14, during which time he received $20,447.64 based upon his fraudulent actions. Larrabee surrendered himself to the New York State Police Auburn Barracks this morning, and was arraigned in the Fleming Town Court. He was then remanded to the custody of the Cayuga County Sheriff’s Office in lieu of posting $1,000 cash or $2,000 bond bail. District Attorney Jon Budelmann commented on the allegations/arrest: “The defendant is accused of altering and fabricating medical records in order to avoid fulfilling his duties. In so doing, the defendant showed a blatant disregard for NYS taxpayers, his co-workers safety, and his own reputation. This incident is a blemish on the good reputation of the hard working men and women of the Department of Corrections and Community Supervision, as well as all law enforcement in general. This arrest is the culmination of the hard work of many different state agencies working together. Rest assured that this Office will act firmly on any abuse of the public trust and/or theft of money from the taxpayers of this great State.”