The Newark Pilots used a late-inning surge to turn a one-run game into a convincing 9-1 victory over the visiting Elmira Pioneers Tuesday night at Colburn Park.Newark’s second, third and fourth hitters in the lineup combined to finish 9-for-12 with six runs scored and six more batted in to lead the offense. Kyle Norman (San Francisco) finished 2-for-3 with two runs, Cody Wiktorski went 3-for-4 with three runs and one RBI and Mark Martin (Le Moyne) led all batters by going 4-for-5 with 5 RBIs and one run scored. 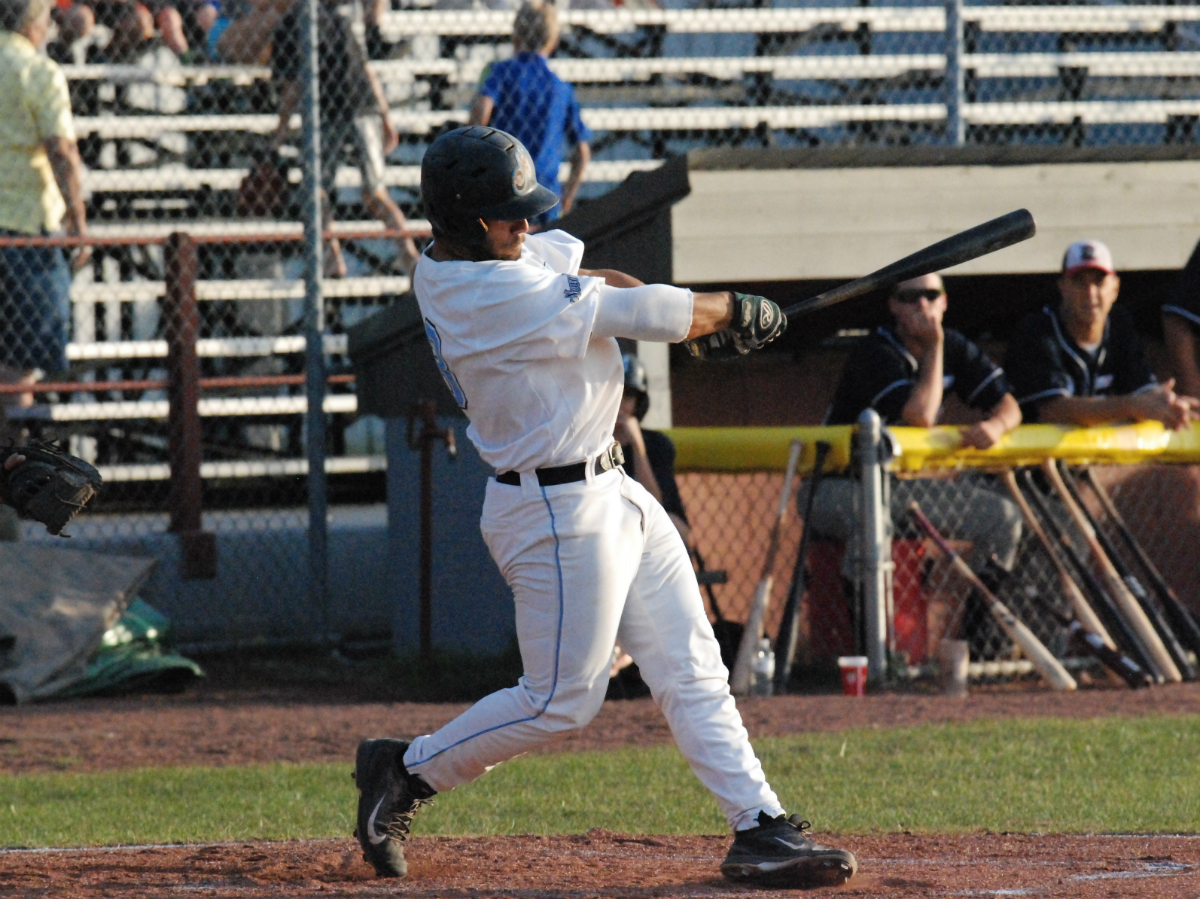 Holding on to a slim 2-1 lead, the Pilots (20-28) scored five times in the seventh and twice in the eighth to run away from the West Division-leading Pioneers (32-16). Norman was hit by the first pitch of the seventh and Wiktorski doubled to move both runners into scoring position. Martin then delivered a two-run two-bagger to extend the cushion to three.Martin stole third and scored on a Will Gorman (RIT) base hit. Two batters later, Kyle Bartelman (Columbia) singled to right to plate Gorman. Corey Lerche (Central Connecticut State) made it 7-1 as he scored when the ball got passed Elmira right fielder Rob Perteet (Samford).In the eighth inning, Wiktorski missed a home run by inches as he doubled off of the top of the wall in left field, scoring Norman. Martin then earned his fifth RBI with a base hit for Newark’s ninth run. It is the second time this season Martin has driven in five runs in a game; he matched the feat in an 11-4 win at Victor on June 20.Martin’s base knock in the bottom of the first gave him his first RBI, driving home Wiktorski to give Newark an early 1-0 lead. Tommy Mirabelli’s (Kansas) double in the following frame tied the game at one run apiece.The Pioneers threatened to take the lead in both the third and fourth innings. They loaded the bases with nobody out in the third, but Newark starter Jacob Wloczewski (Binghamton) got Perteet to foul out before he fanned Christian Santisteban (Manhattan) and Hayden Kelly (Florida State). With runners on second and third with one out in the fourth, Bartelman, playing second base for the Pilots, fielded a sharply hit ball by Taylor Hillson (Mansfield) and gunned down Mirabelli at home to preserve the tie.Wloczewski (3-2) earned the win with six innings of one-run ball. He fanned four batters against three walks on 108 pitches. Casey MacClaren (Cazenovia), Vinny Martin (Iona) and Josh Appel (Brockport) each tossed a scoreless inning of relief.Tristan Widra (Samford) was tagged with the loss after giving up the go-ahead run in the fifth. Kyano Cummings (Siena) pitched a predetermined two innings to start for Elmira, and with two strikeouts, he tied the Perfect Game Collegiate Baseball League (PGCBL) single-season record with 74.With the win, the Pilots are now tied for third place in the PGCBL’s West Division with the Utica Brewers (20-28). The Brewers, however, hold a 4-3 edge in the season series, giving them the tiebreaker for the final playoff berth out of the West with two games remaining in the regular season.The Newark Pilots are home again on Wednesday, July 29 as they continue their fight to earn a postseason berth. They host the Mohawk Valley DiamondDawgs (30-18) at 7:05 p.m. at Colburn Park. The Pioneers face the RailRiders (25-23) in Victor at 5 p.m. on Wednesday.