The Lyons Community Center will celebrate the 25th anniversary of the Americans with Disabilities Act at the Trail of Hope at 1:30 pm, Thursday, July 23. In 2011, Trail Works implemented the Forever Wild for Everyone program. “We believe that all people, regardless of their ability or age, have the right to enjoy nature and its many benefits,” said Trail of Hope coordinator Mark DeCracker. “Our role as stewards of the Forever Wild for Everyone program in Wayne County is to develop and/or designate nature trails without barriers that everyone can enjoy.” 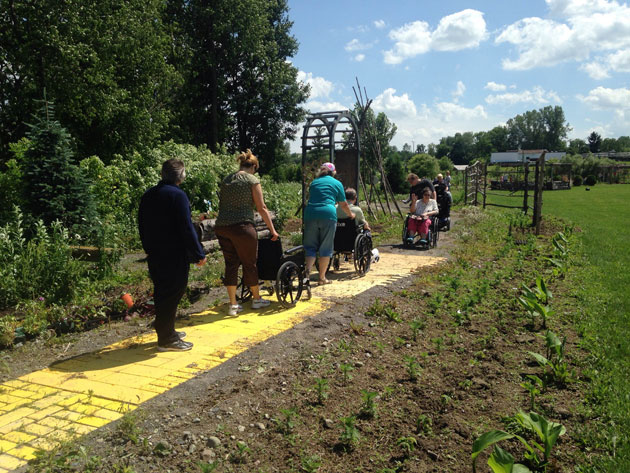 Work on the Trail of Hope began in 2011. Since then, the trail has evolved into a quarter-mile accessible trail for all ages and disabilities to enjoy. The trail now features more than 20 themed gardens, a pond, waterfalls, the “Native Way” honoring the Native Americans with native plantings, and the Yellow Brick road. The Yellow Brick Road is paved with hundreds of yellow bricks painted by residents of nursing homes and other facilities, inscribed with the name of each painter, and installed along the trail during the annual Week of Hope. More than 500 people in wheelchairs have visited the Trail of Hope in the past few years, DeCracker said. In addition, the Trail of Hope has provided many young people their first exposure to nature as they walk on the trail or participate in planting or other projects, he said.On July 23rd, 40 employees of Russell, Phillips and Associates, L.L.C. will volunteer at the Trail of Hope. “With their help we will have extra hands to push wheelchairs and provide assistance while walking,” said DeCracker. “We invite all those associated with nursing homes, assisted living facilities and developmentally disabled people to join us on the Trail of Hope to celebrate the Americans with Disabilities Act while enjoying the wonderful gardens and natural settings that the Trail of Hope provides.” In 1986, the National Council on Disability recommended enactment of an Americans with Disabilities Act, and drafted the first version of the bill that was introduced in the House and Senate in 1988. Senator Tom Harkin (D-IA) authored what became the final bill and was its chief sponsor in the Senate. Harkin delivered part of his introduction speech in sign language, saying it was so his deaf brother could understand. The Americans with Disabilities Act was enacted by the U.S. Congress in 1990 and signed into law on July 26, 1990, by President George H. W. Bush.