Skip to content
»
Home > Uncategorized > The latest from Habitat of Humanity’s project,members

The exterior walls are all in place, and volunteers are setting the studs for the interior walls of Habitat for Humanity’s project at 30 Chestnut Street. The house will be a three-bedroom, fully handicapped accessible home for Mike Teufel, his wife Leeanne, and their two boys, age 3 and 9. Teufel, who has muscular dystrophy and uses a prosthetic leg, said he has been in an out of a wheelchair for the past seven to eight years. An addictions counselor, Teufel said he is excited that his new home will have the wider doorways and other accommodations he will need in his wheelchair. Vice President Menzo Case said he hopes groups will turn out on June 27 to help lift the roof trusses in place. 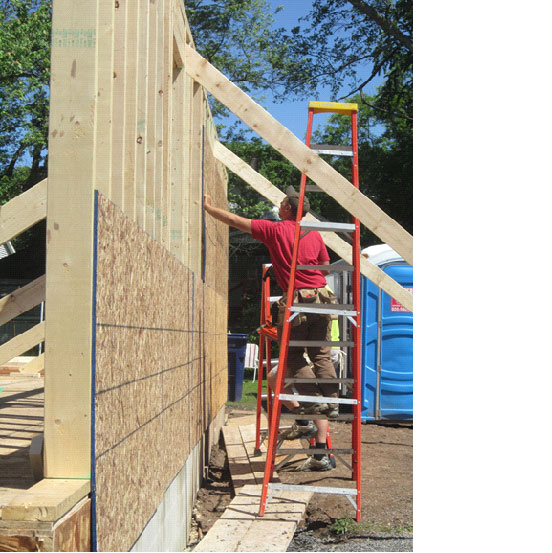 In the meantime, the Habitat board held its annual meeting and elected new officers. Karen Simon was elected to a one-year term as president, and Menzo Case was elected vice president for a one-year term. Pamela Ferrara will serve as secretary and Ruth DeBaise as treasurer. Board Members Renewed for two-year terms are Ruth DeBaise, Jeff Shipley and Sarah Smolinski. Bonnie Morlang was thanked for her service, having completed serving six consecutive years as a Board Member. Term limits allow board members to serve three two-year terms, and the president and vice president to serve three successive one-year terms. The treasurer and secretary may serve six successive one-year terms.Construction manager Lou Ferrara was reelected to a term of one year. Brian MacIntyre was elected to the board for his first term, and will work with Ferrara as Assistant Construction Committee Chair. Volunteers are needed on Tuesdays and Thursdays from 4 to 7 pm and Saturday from 7:45 am to 3:30 pm. It is preferred, but not required that volunteers notify Habitat in advance, especially if a group is coming. For more information about volunteering or making a donation, contact Habitat for Humanity at volunteer@habitatseneca.org. Habitat for Humanity of Seneca County, NY, is a locally run affiliate of Habitat for Humanity International, a nonprofit, ecumenical Christian housing organization. Since its founding in 1976, Habitat has built, rehabilitated, repaired or improved more than 400,000 houses worldwide, providing simple, decent and affordable shelter for more than 2 million people. Habitat in Seneca County was established in 1999. The group has built or renovated 14 homes, having just completed renovation work on number 14, on Wycliffe Ave., Waterloo. Projects 15, 16, 17 and 18 are under way in Seneca Falls, two on Miller Street, and one each on Chestnut, and White Street. Habitat has tentatively identified projects 19 (in Seneca Falls) and 20 (in Waterloo and has a family waiting in the south end of the county for a location. Habitat for Humanity works in partnership with people in need to build homes or renovate existing homes to create decent, affordable housing. The houses then are sold to those in need at no profit and with no interest charged. Mortgage payments received by the affiliate are used to build more homes.