Nineteen-year-old Richie Bennett has been a proud member of the Magee Fire Department in Seneca Falls, NY since he was a young boy. He has been attending meetings, watching drills, and supervising burn downs, all under the watchful eye of his father, Magee Volunteer Firefighter Richard Bennett. But Richie has never been able to do the one thing he wanted to the most… ride in a fire truck.Richie has a condition that affects his nerve endings, progressively shutting down parts of his body. This has led Richie to be in a wheelchair and fully dependent on his parents and aides.”The Magee Fire Department in no way feels sorry for Richie,” explains Richie’s mother Robin. “Even though his body cannot move gracefully, in his heart and his mind, he is a real fireman. When they report to the fire calls, they know Richie is there with them in spirit.”

The Department has not been able to give Richard a ride due to insurance limitations. They had been working on the issue for some time and finally, on Monday, they were excited to be able to surprise Richie with a ride on their fire truck. But it didn’t just end there. They planned something even more special for his big day. When he arrived at what he thought would be a routine visit to the firehouse he was told that it was time for him to finally go for a ride. His Dad and fellow firefighters picked him up from his wheelchair, buckled him up in a seat in Richie’s favorite truck, engine number 901. They fired up the lights and sirens, and off to his house they went. 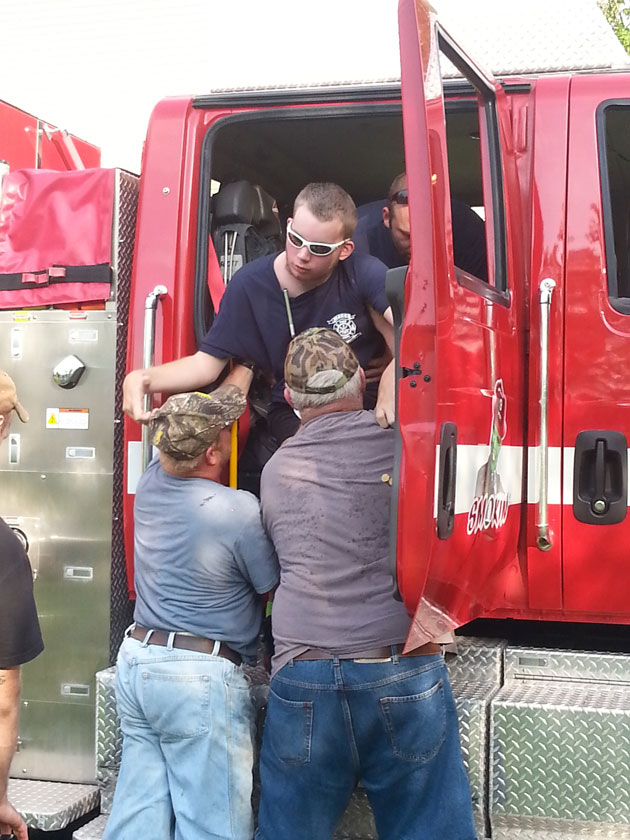 His friends at the department arranged a drill in Richie’s backyard. They set up a portable training pond, deployed the hoses, and started the drill, with Richie being first up. Of course, things got pretty wet. Richie and a few of the volunteers made sure Chief Craig Reynolds tested the pond water. “There is no better way to bring the fire service to the community as we did tonight,” said Chief Reynolds. “Richie Bennett is an honorary assistant chief with the department and there is nothing better than to see him laugh. It is priceless. Richie is an inspiration to all of us at the Magee Fire Department.”