In celebrating 2014-2015 at their annual spring luncheon this week, the Schuyler Hospital Auxiliary proudly announced that their donations back to Schuyler Hospital in 2014 totaled $28,477 – a new record for the volunteer organization.Funds were raised through a variety of events, including the Festival of Lights, House Tours, and a Spaghetti Dinner sponsored by the Watkins Glen-Montour Falls Lions and the Montour Moose Lodge. Fundraising sales throughout the year included raffling a quilt donated by the Triple H Quilting Club, creating and selling a desktop calendar with photos by local residents, book and uniform sales, jewelry sales, Christmas in July, and Pearls & Purses. Auxilians also co-sponsor the hospital’s largest fundraiser, November Splendor, and operate the Gift Shop – in a brand new space for 2014-15. 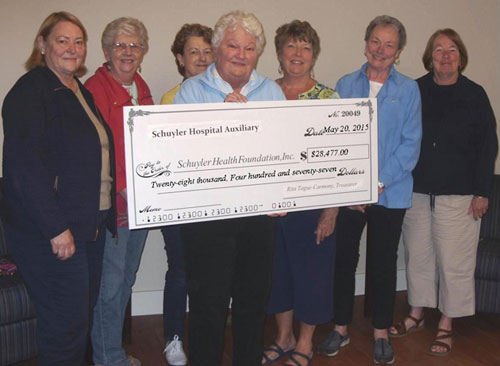 All of these efforts allowed the Auxiliary to fund a number of needs around the hospital and Seneca View Skilled Nursing Facility, including: monitors, a metro cart, and chairs in the new operating rooms; a blanket warmer and televisions for the Emergency Department; and wheelchairs for both facilities.In addition, the Auxiliary gave back to the hospital’s Chaplaincy Fund, assisted employees in need through the hospital’s holiday “Schuyler Santa” program, and funded (3) $1000 scholarships for (2) students and (1) employee furthering their healthcare education.The Auxiliary welcomes new volunteers. Download an application at www.schuylerhospital.org. To find out more, email info@schuylerhospital.org, or contact Volunteer Coordinator, Chris Updyke at 535-4445.