When the Waterloo Library and Historical Society decided to reorganize the Terwilliger Museum many years ago, two people stepped up right away to lend a hand with that monumental project. Thousands of objects had to be moved, sorted, catalogued and generally taken care of in one way or another. Carl and Ruth Schoenacker were the “dynamic duo” who brought so much talent and experience to the task. They will be honored with the Henry C. Welles Award on Friday, May 22 , at the Terwilliger Museum. Tickets are available at the Waterloo Library for $10.Ruth’s background as a Home Economics teacher in Romulus was called upon when she took care of the many clothing items that the museum had. She washed, ironed, mended and properly stored each item. She learned how to make padded coverings for hangers so that the delicate period clothing could be hung without ruining it. She completely reorganized the storage of all of the fabric items. 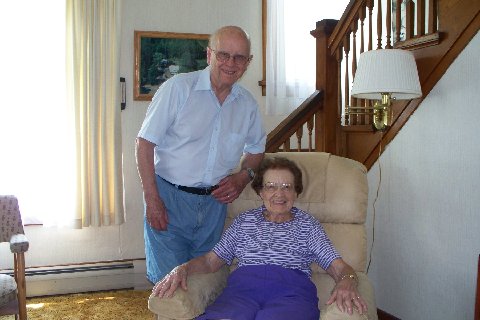 While Ruth took care of the fabric items, Carl and his very good buddy, Walter Rocky, created and built new walls and display panels; totally reorganizing the two floors of exhibit space. They were the” WD40 twins.” Anything that could benefit from a cleaning and coating of WD40 got it.As a WWII veteran Carl had a hair-raising experience in the Mediterranean. His ship, the HMS Rohna was torpedoed and he spent several long days and nights in the water. For years after the survivors came home, there was no public acknowledgment of the sinking of that ship. Carl and the men who had survived met annually and pushed hard to have the incident made public. The National Memorial Day Museum had a very special exhibit detailing the sinking of the HMS Rohna thanks to the Carl’s effortsWhile a member of the Board of Trustees, Carl took over the publication of the Society’s newsletter. He loved working with his computer and did an outstanding job. Both he and Ruth were staunch supporters of the work of both the library and the historical society. We are ever grateful for the work that they contributed to the look of both the Terwilliger and the National Memorial Day Museums. They did the work well and with a wonderful sense of humor. Carl died in June 2011 at age 92 in Philadelphia at a reunion of the survivors of the HMS Rohna with his wife and son at his side. He had ridden on a float honoring WWII veterans in the Celebrate Commemorate parade the previous month.Reporter Doris Wolf, writing his obituary in Seneca Daily.com, recalled Carl Schoenacker’s “ready smile and boundless energy (that) enlivens the meetings of the Waterloo Library and Historical Society Board of Trustees,” on which both served. She noted that “Television watchers keep informed about local weather through Carl’s reports from Waterloo on WORC-TV8, Rochester.”A 2012 Resolution by the NYS Senate said, “Armed with a humanistic spirit and imbued with a sense of compassion, Carl Schoenacker leaves behind a legacy which will long endure the passage of time and will remain as a comforting memory to all he served and befriended.”During Celebrate Commemorate, the National Memorial Day Museum will be open from 10-4 Friday ,10-5 Saturday and Sunday and 12-5 Monday. Terwilliger Hall is part of the Library (no longer Museum) so it will only be scheduled to be open from 10-1 on Saturday, or by appointment. The 16th annual Celebrate Commemorate event will be held May 22 through 25 in Waterloo, the Birthplace of Memorial Day. For more information about the events, go to www.waterloony.com.The 149th consecutive commemoration of Memorial Day will be on Friday, May 30. It will include prayer services, and the official Memorial Day parade at 6 pm.