Jacob Erway believes in setting lofty goals for himself – and achieving them.On Sunday, May 3, Erway will achieve his highest goal so far when he becomes an Eagle Scout. The Court of Honor will be conducted by his fellow Boy Scouts and Scoutmasters from Troop 74. And beaming – and probably crying – with pride will be his parents, Yvonne and Brian Erway of Bostwick Road. 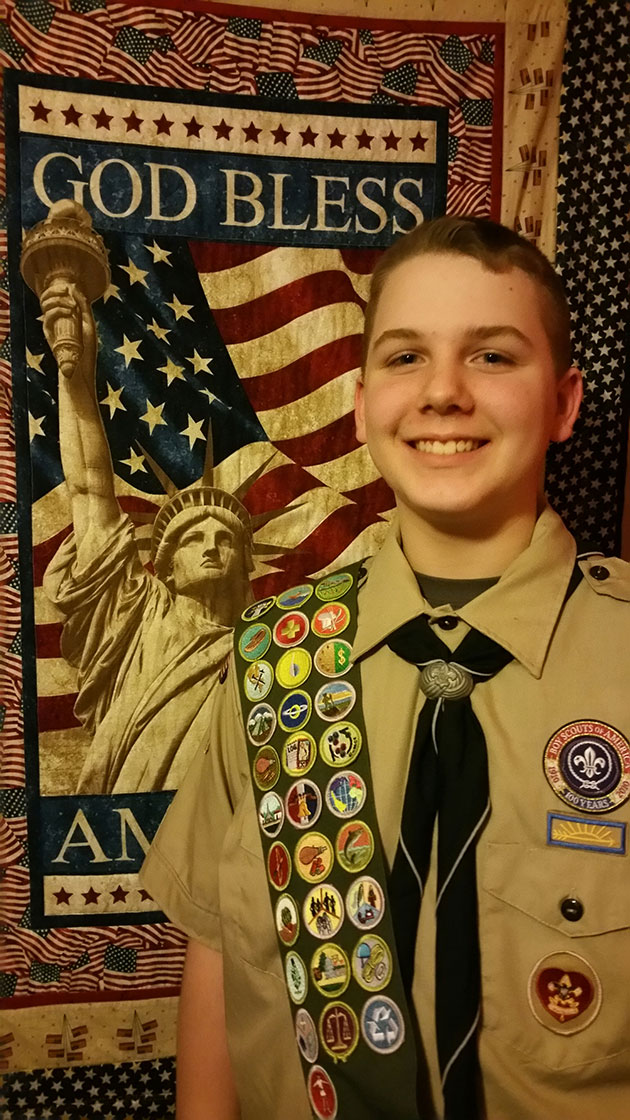 Jacob Erway, a ninth grader at Waterloo High School, joined Scouts as a bear in 2007 and fell in love with Scouting. He set a goal to become an Eagle Scout before he turned 15, “To leave extra time to earn palms and other awards” he explained. He achieved his goal “three months and five days before his 15th birthday”, he said proudly.In addition to Boy Scouts, Erway is active in Rotary Interact Club, is a Young Republican, and attends DEC Camp DeBruce in the Adirondacks, first as a camper and subsequently as a volunteer to help camp counselors.Brian Erway said being his son’s Scoutmaster “has been fun and a huge learning experience for the both of us. I feel I was probably more demanding of him because I thought I knew his capabilities, but he exceeded my expectations. On the other side, he pushed me as well to become a better person, to live by the same code Scouting has taught him. To step up and give back to our community, get involved, try new things and don’t be afraid to fail, especially in front of your child, because they see you pick yourself up and try again.” In the trenches – Jake Erway replaces a bulkhead door of the West Junius Methodist Church as part of his Eagle project.For his Eagle project, Erway chose to replace railings and cellar doors on the West Junius Methodist Church. Erway and his crew also repaired the side of the church that was damaged in a car accident. “I wanted to do something to help my community, to help Junius,” Erway said, explaining why he chose that project. The church is an historic building that hasn’t been regularly used for about 50 years. “But the cemetery still gets used,” Erway noted. As he and more than 20 Scouts and adult friends cleared the cemetery, Erway said he was surprised to discover headstones of veterans from every war, beginning with the Civil War, through World Wars I and II and continuing to Desert Storm. Leading the work crew was the most challenging part of his Eagle Scout project. “It was difficult trying to be everywhere at once, making sure everything was going smoothly, and coping with my obsessive-compulsive disorder that wanted everything to be done just so.,” he confessed. “I learned how hard it is to let go. And also how difficult it is to verbalize what I wanted done and to delegate.”Those are lessons that will serve Erway well as he pursues his next goal, of attending college to become an environmental officer. He’s also considering studying to become a chef at Paul Smith’s college.His mother, Yvonne, said Jacob’s drive and ambition never ceases to amaze her. “He has a self driven path in his head, and he knows exactly what steps he needs to take to get there. Our family functions on the premise that if you want something, you must be willing to work for it. Jacob is no exception. He had been taught to set goals, and follow through. He knows that he has a responsibility to this world. We know that it is our responsibility to send our children into this world prepared and capable. Scouts has helped us prepare Jacob for a life of service and accountability in his community.”