The 2015 Seneca7, a 77.7-mile relay race consisting of more than 200 seven-member teams running the distance surrounding Seneca Lake, will take place this Sunday, April 19. The race begins in Geneva at 7 a.m. and winds through Ontario, Yates, Schuyler, and Seneca Counties, including a jaunt through the village of Watkins Glen. It finishes in Geneva with a celebratory bonfire and official awards ceremony at 7:27 p.m. 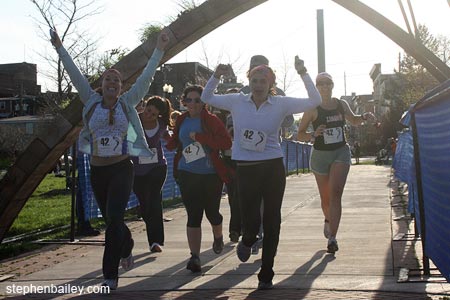 The 2015 race filled to capacity in an hour this year, setting a new record for the event. Demand for a Seneca7 entry has dramatically increased from year to year – it had filled to capacity by December 31 in 2013, and took just five days in 2014.The race was featured in Runner’s World magazine in April 2012. The spotlight included photos of the course and its participants, boosting the event’s recognition nationally after a successful inaugural year. This year’s race drew entries from seven states, from Indiana to North Carolina, as well as the District of Columbia.Race organizers say that demand for the event was much higher than the number of teams entered, as evidenced by the waiting list, which quickly swelled to more than 70 teams in under an hour.“The number one question we get is why don’t we just add more teams,” says race co-director Jackie Augustine. “We’d love to meet the participant demand for a larger race, but the field size is limited by the exchange point parking lots. As much as we’d like to, we don’t believe we could responsibly add more.”The exchange points are where one relay team member hands off the baton to the next. Numerous area businesses have volunteered to serve as exchange points, including local wineries, restaurants, and even a marina. Race organizers hope that athletes travelling from out of town and out of state will make a weekend of their visit, and possibly even return to the Finger Lakes region for future vacations.“Our hope was to create an event that would combine our passion and enthusiasm for running with our love for the Finger Lakes, with a backdrop of some of the most beautiful scenery available anywhere,” says Jeff Henderson, Seneca7 race co-director.Judging from the popularity of the event, it appears that they may have succeeded.