The Tompkins County Chamber and Red Newt Racing are pleased to announce their collaboration to host the Gorges Ithaca Half Marathon in Ithaca this year. The event, presented by headline sponsor Cayuga Medical Center, is slated for the morning of Sunday, June 14th is anticipated to bring in upwards of 800 visitors to the county. The course will begin and end downtown, with an after party highlighting the Commons and local businesses. 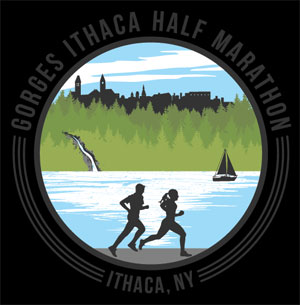 “We wanted to host an event that generated tourism revenue on an otherwise quiet summer weekend, benefited our member businesses, and became a great and long-standing community event in Ithaca, said Chamber President Jennifer Tavares. “We live in a community that appreciates healthy living, exercise, and natural beauty: all which contribute to our quality of life and are celebrated and enhanced by our Chamber’s work.”

For the inaugural year entrants will travel a hilly but beautiful course tying in a downtown staging, passing through the great neighborhood of Fall Creek, the Cayuga Waterfront Trail, tracing the base of Cayuga Lake, passing through the Cayuga Heights neighborhood, and looping through a portion of Cornell University. Major construction in Ithaca planned for this summer diverted the route into the hills, but Golden is optimistic that the flat course he originally planned will be ready for use in 2016, saying “The course that I initially marketed and really hoped for didn’t prove feasible this year, but what we’re left with is a beautiful route more representative of Ithaca than any other may have been, or will be going forward.” The Chamber and Red Newt Racing are thankful for major support provided by the City of Ithaca and Cornell University’s Department of Community Relations. The Tompkins County Tourism program and Downtown Ithaca Alliance also helped to move the event forward. Thus far, Cayuga Medical Center and Island Health and Fitness have signed on as the headline sponsors, and Ithaca Milk is on board to provide some of the best yogurt in the country post-race. For more information about the Gorges Ithaca Half Marathon, or to register, please visit the Chamber’s website at www.tompkinschamber.org, or go to www.RedNewtRacing.com.