The Smith Club Series will present its unique brand of intimate concert experiences with three shows over the first three weekends of May. Performances include Wisewater at Billsboro Winery, Red Molly at Club 86 and Amy LaVere at the Cracker Factory. WisewaterMay 2 begins the three-show run with Nashville-based band Wisewater at Billsboro Winery, 4760 West Lake Road, Geneva, for a 7:30pm show. The trio has earned praise from the likes of Alison Krauss, Rosanne Cash, Mary Gauthier, and others for their lyrical honesty and clarity, infectious melodies, tight harmonies, and instrumental virtuosity. Members Kate Lee, Forrest O’Connor, and Jim Shirey are three young, positive, worldly artists whose songs blend roots, country, rock, and progressive acoustic music in a unique, refreshing way.They’ve shared the stage with Emmylou Harris, John Cowan, Ricky Skaggs, and many others. Their debut EP, The Demonstration, was released in November 2014 and reached #13 on the iTunes singer-songwriter charts. The band is currently at work on their first full-length album, due out later this year. Kate Lee has local ties, having grown up in Rochester, and played locally for many years with her band Kate Lee and No Strings Attached. At age 20 Lee met award- winning mandolin player Forrest O’Connor, the son of legendary violinist Mark O’Connor, through a Nashville producer. Then a student at Belmont University inNashville, and she had already sung and played fiddle behind Rod Stewart, Keith Urban, Brad Paisley, Vince Gill, Sugarland, and many other major entertainers. The pair later invited Jim Shirey, a former Harvard classmate of O’Connor,s to make the duo a trio. Red MollyAmericana powerhouse vocal trio Red Molly will perform at Club 86, 86 Avenue E, Geneva,on May 8 at 8pm. Laurie MacAllister (bass), Abbie Gardner (Dobro), and Molly Venter (guitar) weave together the threads of American music-from folk roots to bluegrass, from heartbreaking ballads to barn-burning honky tonk-as effortlessly as they blend their caramel voices into their signature soaring, crystalline three-part harmonies. Organic musicianship, a respect for the traditions of American music, and an obvious love of crafting music together lend a joyous atmosphere to their legendary live performances, and a natural balance to their studio recordings.Gracing stages from Denver to Denmark, from Australia to Austin, Red Molly is renowned for their live shows. Four-time featured artist at MerleFest, breakout stars at RockyGrass, and the darlings of the Bristol Rhythm and Roots Reunion, the “Mollies” bring audiences to their feet, whether it’s on a grand festival stage or in an intimate concert hall.Their latest CD, “The Red Album”, realized on May 27, 2014, was featured in USA Today and CMT Edge. It spent 16 weeks on the Americana Radio Top 40 chart, reaching #10, and it was #1 on the Folk DJ Radio Chart for all of 2014. 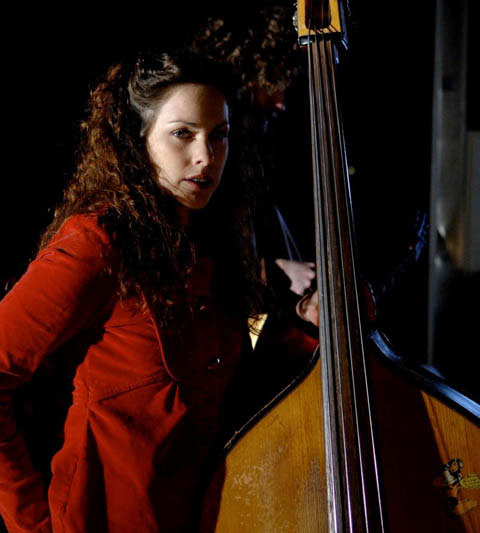 Amy LaVereTouring on her acclaimed fifth album, Runawy’s Biography, Amy LaVere visits The Cracker Factory, 35 Lehigh Street, on May 15 for an 8pm concert. She travels to Geneva as a duo with Will Sexton, a featured guitar player on her new CD. LaVere has taken many roads on her journey to stardom: She’s not only a singer, songwriter and bassist, but she’s also acted – most notably in Walk the Line, in which she plays rockabilly pioneer Wanda Jackson. Born in the Deep South and raised in Detroit, she once led a punk band but now lives in Memphis – a town that complements her blend of classic country, jazz and gypsy blues. It was there that she caught the attention of Memphis-based independent label Archer Records , which released her striking debut album, This World Is Not My Home, in 2006. With each subsequent release LaVere has reaped he praise of critics and fans alike. She has been featured several times on NPR’s Mountain Stage, World Cafe and All Things Considered. She maintains an energetic and ambitious touring schedule, including the famed stages of South by Southwest, Austin City Limits and the Americana Music Festivals. The Smith Club Series is a small concert project of the Smith Center for the Art.The Smith Opera House is located at 82 Seneca Street, Geneva. Box Office Hours are Monday through Friday, 10am to 5pm and Saturday 10am to 2pm Phone: 315-781-5483. Email: [email protected] For event listing and more information about The Smith and The Smith Center For The Arts, visit our website thesmith.org