At the recent Association of Chiropractic Colleges Educational Conference and Research Agenda Conference (ACC-RAC) in Las Vegas, New York Chiropractic College president, Frank J. Nicchi, DC, MS was honored by the ACC with an award for his “exemplary leadership, commitment, enterprise and service to the ACC.”This award is given by the ACC only on occasion where an individual has provided service and leadership “above and beyond,” explains Brian J. McAulay, DC, PhD, president of Parker University and immediate past president of the ACC. Dr. Nicchi has been a member of the Board of Directors of the ACC since 2000 and has served as the organization’s secretary-treasurer, vice-president and president. Additionally, he has chaired several committees and was instrumental in the formation of the ACC’s Institutional Statistics Committee. As president he oversaw a successful strategic planning process (held on the NYCC campus in July 2009) and proved to be a very strong and effective leader. Dr. McAulay says that Dr. Nicchi brought a disciplined “no nonsense” style to the position. As past-president (2011 – 2015), Nicchi was notably engaged in Executive Committee deliberations and was a strong helpful advisor to the two active presidents during this time. “Dr. Nicchi’s leadership within the ACC over the past decade has been exemplary; he provided clear direction and a strong strategic approach to the organization, moving the ACC’s agenda forward in a most inclusive and productive manner,” says McAulay.Former Executive Director and current ACC president, David Scott O’Bryon, JD, CAE, added, “Dr. Nicchi always made sure to connect and, more importantly, get input from all the ACC member institutions. His diligence and his integrity to represent all of chiropractic education resulted in closer cooperation among the schools.” 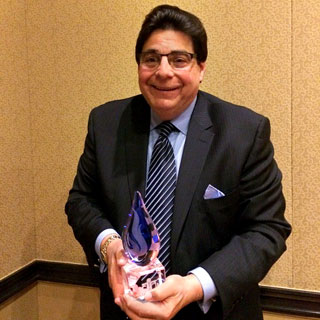 “I was completely surprised and deeply honored by this recognition,” said Dr. Nicchi. “The ACC is an outstanding professional organization that works to advance chiropractic education, research and service and I am proud to have made some contribution to its success.”