The Lyons Lions varsity basketball team continued their march through the postseason in Class C with a 67-63 victory over Buffalo’s Middle Early College before a full-house at Rush-Henrietta High School on Saturday afternoon. 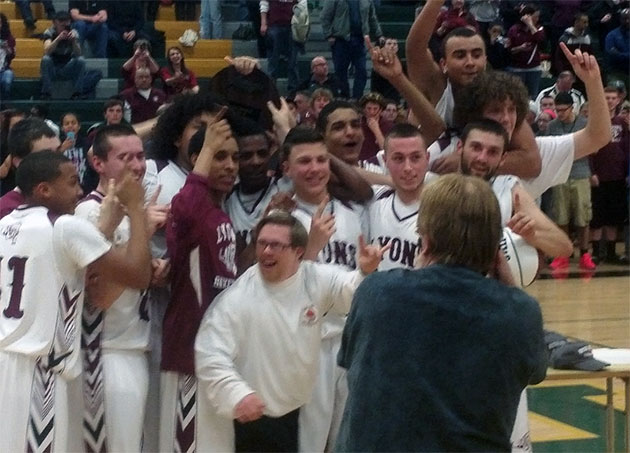 After defeating RCMCS in the Blue Cross Arena a week ago to capture the Section V Class C3 Championship, Head Coach Zac Young’s Lions marched through the Section V Class C State Qualifying Tournament with victories over Early College and Caledonia Mumford. On Saturday, Young brought his Lions into his firs ever appearance in the state tournament and despite facing a bigger, more athletic team, came out victorious and is headed to the state final four in Glens Falls on Friday afternoon. They will face Waterville (Section 3) who defeated Newfield (Section 4) in a game that tipped off at 5 pm Saturday. Check out the state Class C brackets here,Lyons held a slim 2 point lead after the end of the first quarter after an unusual circumstance halted play with 4:44 remaining. A relation of Lyons’ junior guard Adam VanBuskirk had a medical episode in the stands and play was halted with both teams returning to the locker room. VanBuskirk could be seen, visibly shaken and upset, being consoled by coach Young and Athletic Director Steve Veeder. At one point, VanBuskirk was taken into the stands near the activity of the afflicted spectator. Eventually, the individual was able to walk down the bleacher steps and family members were seen telling VanBuskirk that “he was fine” and “everything was all right”. He was encouraged to return to his team and play hard.

Players back on court ready to resume. Apparently the individual in the crowd is ok. pic.twitter.com/P8vrl4qoPd

When play resumed, sophomore Daryn Carsewell caught fire hitting a three pointer and adding a driving layup for five points in a 30 second span.When VanBuskirk checked back into the ball game for the first time after the delay, he received a big ovation from the packed gym at Rush-Henrietta. He responded shortly after by nailing a three-pointer to give Lyons a 1 point lead with 3:41 to play in the first half. Lyons would never trail again the rest of the afternoon.

At halftime, Lyons would lead by four despite just 6 first half points from superstar senior point guard Damon Hunter. Hunter had scored 30 or more points in each of Lyons’ 5 previous postseason contests. It looked as if that streak would end Saturday… but you can never count out Damon Hunter.Hunter would come out early in the second half and bury a three pointer and from there on out he was unstoppable, especially in transition, scoring 26 second half points to finish with 31 including several clutch free throws (10-14 from the line on the game). He also pulled down 8 rebounds and dished out 4 assists. He also recorded his 1,000th career point, a milestone that seemed unlikely, if not impossible, just two weeks ago.The remaining cast from Lyons all did their part as well in the victory. Deondre McDonald hit two big second half trifectas to finish with 9 points. Daryn Carsewell finished with 7 points and junior bug man Jordan Aumell had 6 big points in just 9 minutes of action. Chris Peay scored four points and pulled down 8 rebounds while Nick Fera scored 4 points, grabbed 4 rebounds and notched 3 assists.

At one point, with just over four minutes left in the fourth quarter, a Damon Hunter three-point play opened up an 12 point lead at 62 to 50.

Hunter to the hole… bumped… foul… bucket!!! Lyons up 11. Tippy heads to the line to finish three point play

Middle Early College would make a late second half push. After playing in a 2-3 zone for the entire game, they extended to full court pressure late in the game which created a pair of turnovers leading to easy buckets which drew M.E.C. within 1 point with just 30 seconds left in the game.

MEC takes it inside. Hunter fouls the shooter. Two free throws coming for the tie

Hunter’s free throws would seal the win, however, and the Lyons punched their ticket to the Class C State Final Four in Glens Falls. Lyons last trip to the state final four was in 1997.

Head coach Zac Young will be in-studio on Sunday morning at 10:00 am for a special season-finale episode of the Upstate Hoops Podcast on FingerLakes1.TV. 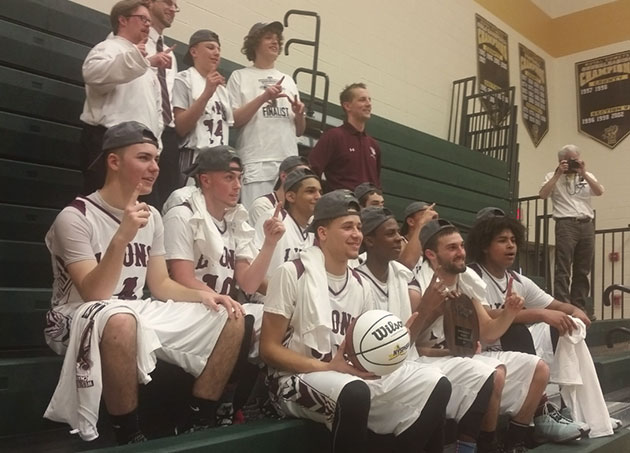