Head coach Jerry Anderson’s Mynderse Academy Lady Blue Devils opened up a 22-10 first half lead and never looked back, defeating Caledonia-Mumford by a score of 50-29 in Canandaigua on Wednesday night in the Section V Class C Play-In Game. The win propels Mynderse into the Far West Regional of the State Tournament and puts them just 3 wins away from a state championship. The Blue Devils huddle prior to the tip on Wednesday night in Canandaigua.Next up for Mynderse, in the Quarterfinals of NYSPHSAA Class C Tournament is Chautauqua Lake out of Section 6 on Saturday at 7:00 pm at Buffalo State college. Chautauqua Lake is the defending Class C state champs defeating Hoosic Valley 47-36 in 2014’s title game. The Thunderbirds are led by Jenna Einink, who was named the Class C Tournament MVP last season as a junior. The Blue Devils open up a 28 point lead as the first half expires.With a win they would advance to the state final four at Hudson Valley C.C. in Troy, NY on Saturday, March 21st. They would meet the winner of Cooperstown (Section 3) and another Finger Lakes regional team, Watkins Glen (Section 4). 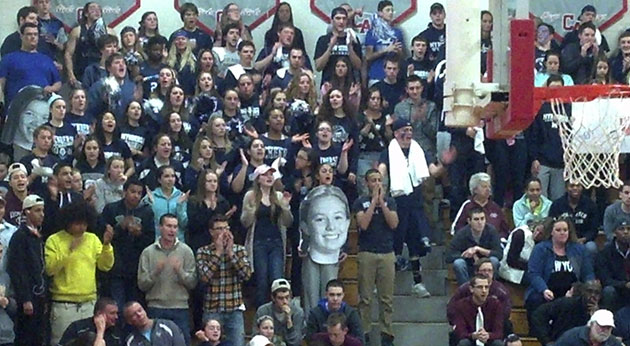 The “Blue Crew” turned out in full force Wednesday night.Click here fpr the complete Class C tournament brackets. You will be able to stream the audio broadcast of Saturday’s game here. Another great game for the Mynderse Academy girls varsity team. It's on to Buffalo! #MYNDERSE pic.twitter.com/YzNpLmGmnj