Seneca Meadows, Inc. and the Seneca Falls Central School District announced Thursday night that the District’s annual energy bill will be cut by $60,000 to $70,000 thanks to a unique partnership developed by Seneca Meadows. The partnership, which involves Seneca Meadows and Seneca Energy, is the result of the companies’ renewed sales agreement. Seneca Energy is the independent power producer that purchases landfill gas from Seneca Meadows to generate electricity and renewable natural gas. 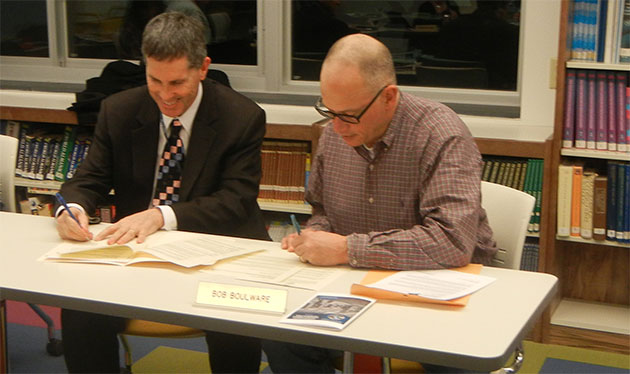 Superintendent Bob McKeveny sign the agreement with Dennis Plaster of Seneca EnergyDon Gentilcore, Area Manager for Seneca Meadows said this about the partnership, “We are pleased to have the resources to develop partnerships that benefit our local community. This creative arrangement provides direct financial relief to the Seneca Falls School District and demonstrates how the development of renewable energy projects such as Seneca Energy’s are not only beneficial to the environment, but the local economy as well. We hope to continue to encourage more great relationships in the future.”The Seneca Falls school District currently uses natural gas for heating and hot water in its four schools and its District office.